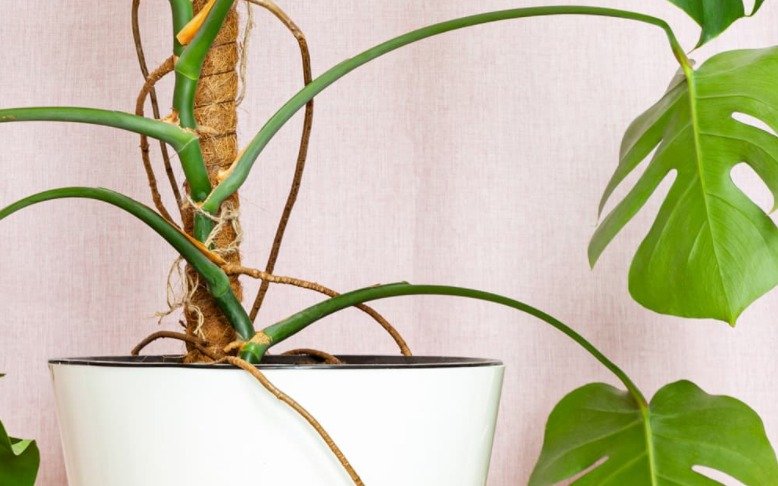 The monstera is a lush, tropical plant that can be found in the rainforests of Central America. It’s one of the most popular plants in modern interior design and has become known as “the newest trend” for those who want to add some life to their home or office space.

These plants are easy to care for and make an excellent addition to any room. This is mainly because they come with unique aerial roots that dangle from their stem like vines from a trellis!

If you don’t want to deal with the aerial root system in your home, consider buying an imitation monstera plant from Amazon.

What To Do With Monstera Aerial Roots?

The aerial roots on your monstera plant are not doing any harm, so it is fine if you don’t do anything with them.

It comes down to your own personal choice and whether it’s necessary or not. For example, if the roots poke people in the face, then you will need to remove them.

Furthermore, the aerial roots may get so big that they damage the decor in your home. You can use some sterilized trimming scissors to trim the ends of the aerial roots.

Alternatively, you can tuck the aerial roots into the pot or another piece of furniture.

What Are Monstera Aerial Roots For?

They look cool – but surely they have a purpose?!! The aerial roots of a monstera plant are used for support as the plant grows upwards.

Basically, they allow the plant to climb up objects, which in turn helps the plants get closer to the light/sun. The aerial roots also allow your monstera to breathe in places that couldn’t otherwise support vegetation.

As such, monstera deliciosa aerial roots have little practical use as they will usually be kept inside.

Can I Cut Monstera Aerial Roots?

You can cut off the aerial roots of a Monstera, but you don’t need to do so. However, monstera aerial roots need constant care and may become unsafe for those whom live inside your house.

The aerial roots are unnecessary for your home’s environment, so it will be down to what you prefer. Check out the video below… those roots definitely needed a cut!

The only concern about cutting the roots of your botanical masterpiece is that there’s a small risk of accidentally damaging the plant. This is why I always use sterilized pruning scissors (Amazon link) when cutting monstera aerial roots.

Can You Propagate a Monstera with Aerial Roots?

Aerial roots cannot grow new plants. This means you don’t need to cut your aerial roots in order to prevent other plants from starting. Though many believe that aerial roots propagation can grow into a new plant, it is actually the leaf node that starts new growth.

Be careful when placing aerial roots into soil or water, as they will likely turn brown due to rot, rather than turn into new monstera plants.

How To Trim Monstera Aerial Roots?

Want a strong, healthy monstera plant? Just trim its aerial roots. It’s really not any different from pruning other houseplants.

The only item you need is a pair of shears that are sharp and sterilized. If not properly sanitized, the aerial roots of a monstera can introduce bacteria and fungi into your plant. Monsteras are fairly hardy plants, but the idea is to prevent any problems before they happen.

When pruning aerial roots, cut them off at the point where they meet with the stem of the plant. Trim the aerial roots but be careful not to cut too close, so as not to damage the stem. It is also important that you do not leave a portion of the root behind.

Trimming aerial roots is generally done during the months of spring and summer. When you’re growing and pruning the aerial roots, they can grow more in an effort to replace what you cut off.

If you prune your plant’s aerial roots, remember that they are not just a decorative addition. The monstera is designed to grow upwards with its aerial roots

Can I keep my aerial roots, even though they are too long?

Yes, you can! The only reason to cut the root system is if it becomes dangerous or causes damage. Just be careful when cutting off monstera aerial roots with scissors as there’s a chance of damaging your plant.

Can I put monstera aerial roots in soil?

I would prefer not to leave monstera aerial roots fully submerged in soil. It may have worked for some people, but others appear to rot the roots instead. They are called “aerial roots” for a reason – they should be in the air.

Can I put monstera aerial roots in water?

I also would never keep monstera aerial roots suspended in water. However, there are reports of people who have successfully kept their monstera in water.

The root structures are so different that comparing them would be difficult. Aerial roots enable the plant to grow more vertically, whereas ground roots remain buried to take in water from the soil.

Are there any benefits to having monstera aerial roots?

Aerial roots provide your plant with support as it grows. Monstera plants need assistance from other objects in order to grow, which is where the root system comes into play. It’s not necessary for you to cut or trim off those pesky aerial roots!

Monstera aerial roots are not poisonous. They contain no toxins that can harm humans or pets, so don’t worry about having them near you!

What does the base look like on my monstera aerial root?

The base of the aerial root may be round or oval in shape depending upon where you live and how fast they grow. You can tell if an aerial root has started growing by looking at the bottom (where it attaches). If there’s green showing on part of it, then that means growth has begun!

How long do monstera aerial roots live for?

As mentioned earlier, Monstera aerial roots are used for climbing and do not require much care after the initial planting. You won’t need to water or fertilize your plant as often, but there is a chance of over-watering which will cause rot.

How long do monstera aerial root systems take to grow?

It takes about ten weeks for new aerial roots to start growing on a Monstera plant. If the root system is too long after this time period, then you may consider cutting some of it off as needed.

What should I do after seeing white spots on my Monstera’s aerial roots?

If you see white spots on your Monstera’s aerial roots, it means the plant is rotting. It can be caused by a lack of water and humidity, so check that there’s enough moisture in its potting mix.

With the exception of vines, nearly all plants have at least one root. Here are other types of roots:

Aerial roots have many functions, with the most notable being an increase of stability.

It is up to you whether or not you cut the aerial roots from your monstera plant. If you’re like me, then cutting any part of a plant feels like cutting off my own arm!

Generally speaking, you should leave your plant as it is. I would only recommend cutting off the aerial roots for your monstera if you’re having trouble keeping it in a contained space.